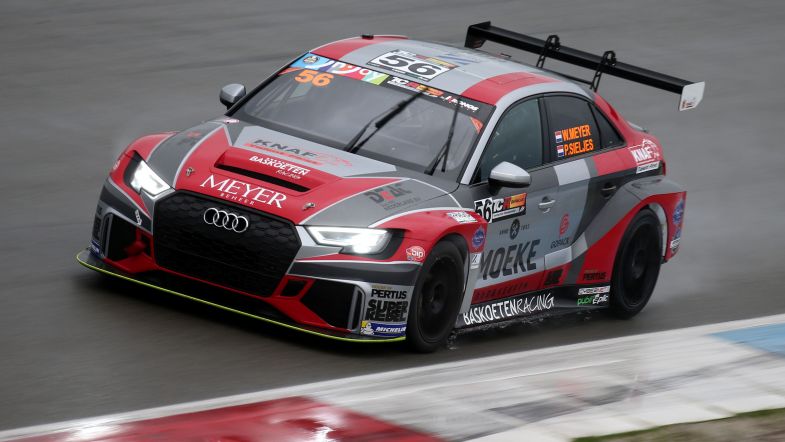 Bas Koeten Racing pair Willem Meijer and Paul Sieljes won the qualifying long race in their Audi RS 3 LMS, finishing ahead of the two Team WRT cars of Mathieu Detry and Sam Dejonghe in the one-hour qualifying long race at TT Circuit Assen, fighting their way through from fifth on the grid.

The title race closes up as the main protagonists had a difficult race, with championship leader Benjamin Lessennes finishing in fifth in the Boutsen Ginion Honda, with his closest championship rival Guillaume Mondron sixth in the Delahaye Volkswagen, with the DG Sport Peugeot unable to make the start.

Guillaume Mondron started from pole position, but fell behind the two Team WRT cars at the start, with Maxime Potty leading the way ahead of Denis Dupont.

Dupont briefly moved ahead on lap four at Turn 1, but Potty reclaimed the spot at Turn 3, but Dupont completed the move at the same corner on lap seven and began to pull away.

In the meantime, the Audis were showing their race pace was much better than their qualifying pace, with Rik Breukers passing Lessennes’ Honda on lap six for fourth, before closing down on Mondron’s Volkswagen and taking third on lap seven.

When the pits opened on lap 15, Mondron and Lessennes were the first to pit, with Guillaume handing over to brother Edouard and Lessennes Honda being taken over by Tom Coronel.

An over-eager Mondron jumped out just ahead of Coronel to try and keep the position, but earned himself a pit lane speeding penalty as a result, relegating them to sixth and last in the final order.

Maxime Potty stayed out the longest before handing his WRT Volkswagen over to Mathieu Detry, rejoining in the lead ahead of Sam Dejonghe’s SEAT, with the two Audis just behind now, driven by Mika Morien and Willem Meijer respectively.

Meijer dived past his team-mate at Turn 1 on lap 19 for third, and quickly closed on Dejonghe’s SEAT, making the move for second two laps later.

Detry was unable to hold on to his lead, and was quickly caught and passed by Meijer’s Audi, with the Dutchman taking the lead on lap 25 through Turn 2.

Dejonghe was forced to defend hard against Morien’s Audi, all the while riding the tail of Detry’s Volkswagen, while Tom Coronel ran a lonely race to fifth, with Mondron over a minute behind after his drive-through in sixth.

The biggest gain in the championship was for Detry and Potty, who are now 41 points behind Lessennes but still in fourth in the standings.

Lessennes extends his lead by two points over Mondron to 16, with the Peugeot pair losing significant ground, now third and 36 points back, but with 100 points available from tomorrow’s four sprint races.

The first race gets underway at 10:50 CET, with the fastest laps from the qualifying long race setting the grid.