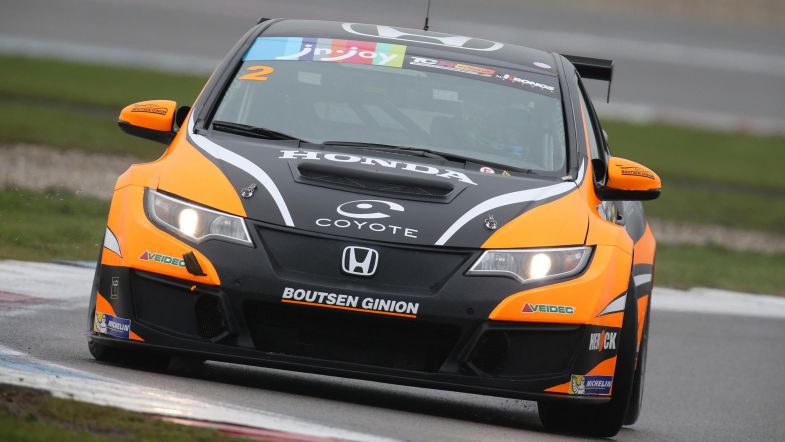 Boutsen Ginion Honda driver Benjamin Lessennes maintains the lead of the TCR Benelux series by 16 points heading into tomorrow’s final race day at TT Circuit Assen, but the Belgian is cautious about a late charge from WRT’s Maxime Potty and Mathieu Detry, with the Volkswagen duo strong so far this weekend.

Potty and Detry finished second in the qualifying long race, with Detry securing pole for the first sprint race, and with Potty putting the Golf GTI third for sprint race three.

Lessennes will start fifth in the third sprint, while co-driver Tom Coronel starts third for the first race of the day, with the Dutchman charged with backing up Lessennes’ title bid. The duo finished fifth in the qualifying long race, with the Honda losing out after an early pit stop and falling away from the leading quartet.

“We haven’t lost too many points, so that’s good,” said Lessennes to TouringCarTimes. “(However) Potty is coming back; he’s just 41 points behind us, so we have to be careful tomorrow.

“We also have 30kg of weight here which is a big influence. We don’t have to push too much, we just have to have a steady run tomorrow.”

Tom Coronel blamed a close fight out of the pits with Delahaye Racing’s Edouard Mondron as the reason why he fell away from the pack, with Mondron given a drive-through penalty for a pit lane speed limit violation, with dropped him to sixth.

“I had a big fight with (Edouard) Mondron,” explained Coronel. “For about 75% of the lap we were side-by-side. It was a good fight but I lost too much time and I lost the connection with the guys in front. I was catching them slowly, like fishing, reeling them in.”