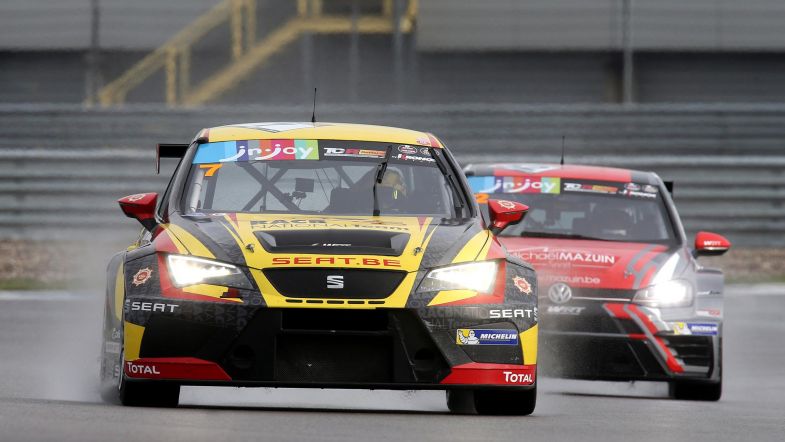 Denis Dupont has sealed Team WRT’s third win of the day in the SEAT León in an eventful first race, in which championship contenders Benjamin Lessennes and Maxime Potty collided at Turn 4.

Dupont had a great start and moved to the lead from second on the grid in his León TCR, with Volkswagen-equipped team-mate Maxime Potty up to second with Lessennes right behind in the Boutsen Ginion Honda after another great start.

There was drama through the first sequence of corners however as Potty spun at Turn 4, and clipped Lessennes’ Honda as he recovered, with Potty’s front-left suspension broken, and Lessennes spun off into the gravel trap.

Potty brought his broken Golf GTI TCR back to the pits for repairs, while Lessennes was stuck in the gravel for two laps.

Dupont began to build a lead over Rik Breukers’ Audi, with Paul Sieljes third in the second of the Bas Koeten Audis, while Guillaume Mondron managed to get back ahead of Aurélien Comte’s Peugeot for fourth on the second lap.

Dupont held a comfortable gap to the squabbling Audis to take his first sprint win of the year ahead of Breukers, while Sieljes served a drive-through penalty on the final lap for contact with Mondron, but had pulled out enough of a gap in the meantime to keep third ahead of Mondron at the finish.

Aurélien Comte finished fifth in the DG Sport Peugeot 308,while Benjamin Lessennes was classified in sixth, picking up vital points in the championship.

Lessennes now leads the championship by 20 points over Mondron, meaning Mondron needs to win the last race with Lessennes not scoring to stop the 18-year-old Belgian from taking the title.