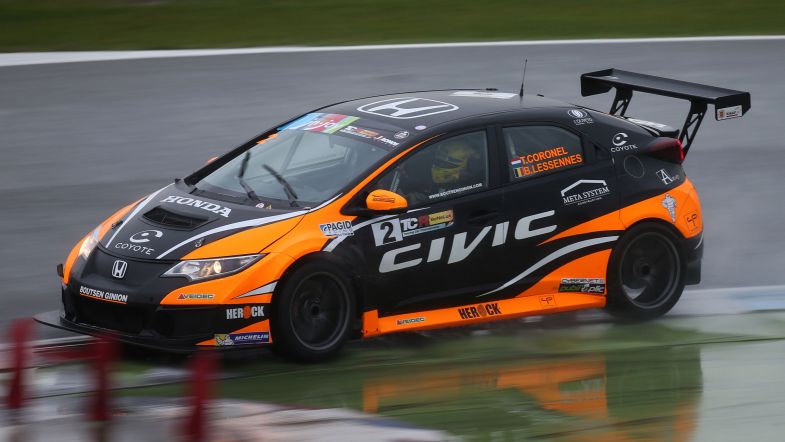 A pair of third places in the first two sprint races at TT Circuit Assen by Tom Coronel has set things up well for Boutsen Ginion Honda co-driver Benjamin Lessennes this afternoon, who now has a 26-point lead with just 50 remaining.

Coronel finished fourth on the road in Race 1, but was promoted to third after the finish after Team WRT driver Mathieu Detry was given a 30-second penalty after contact with the Dutchman in the race.

In Race 2, Coronel had another steady run to third, overtaking Mika Morien’s Audi early on but finishing behind the two WRT cars of Sam Dejonghe and Mathieu Detry.

“I was not taking any risks,” said Coronel to TouringCarTimes. “When there were little battles, I just backed out. I don’t think we had the fastest car today, we knew already that the Golf and the SEAT were faster, but I think we managed it quite well.

“I’m very happy with I two podiums, which I didn’t really expect in the wet.”

On the contact with Mathieu Detry in Race 1, Coronel held no hard feelings.

“It’s touring car racing, it’s no problem for me. He first pushed me off, but when he did it a second time, I think the stewards felt it was a bit too much. For me it was OK, as I wasn’t in the gravel or anything; maybe with more patience it would have been better for him.”