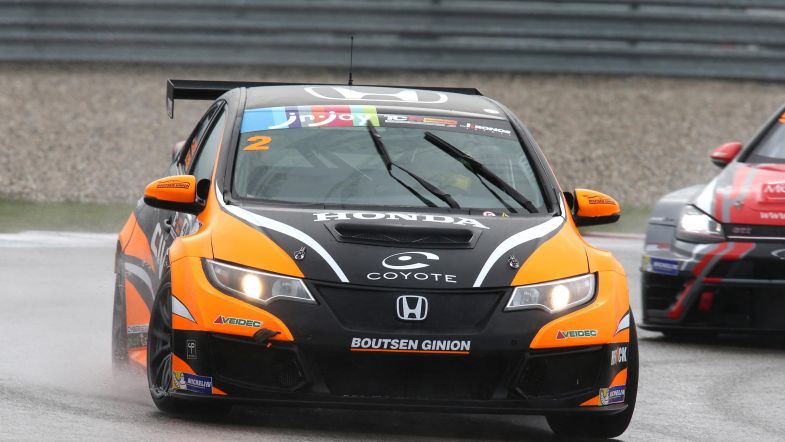 Maxime Potty went from last to first in the final sprint race of the day to score his first sprint race victory of the season, while fifth for Benjamin Lessennes was more than enough to secure the Boutsen Ginion Honda driver the 2017 TCR Benelux series drivers’ title.

The Team WRT SEAT of Denis Dupont led the way from pole at the start, while Paul Sieljes overtook his Bas Koeten Audi team-mate for second into the first corner, with Aurélien Comte placing the fast-starting Peugeot 308 in fourth.

Potty, whose suspension had been repaired during the earlier race by his WRT team, quickly passed Comte’s Peugeot on lap two, while title contender Guillaume Mondron found himself trapped behind the Peugeot for a number of laps, eventually making the pass on lap five.

In the meantime, championship leader Benjamin Lessennes appeared to be driving deliberately off the pace in the Boutsen Ginion Honda, running in seventh and next to no one else on track in order to safeguard his title, in which he just needed to finish, while Mondron had to win.

Potty was on a charge and passed Breuker’s Audi for third on lap four, while Sieljes was closing on Dupont’s SEAT.

On lap eight, the race unravelled as Sieljes tried to go around the outside of Dupont’s SEAT at Turn 3 for the lead, but the two made contact.

An unsettled Dupont fell behind team-mate Potty, while Sieljes swung his Audi back on track and right into his team-mate Rik Breukers, and then retired in the gravel trap.

Breukers was able to continue and moved up to second a lap later as Dupont stopped on circuit.

On the final lap, Comte was able to steal third back from Mondron’s Volkswagen, who finished ahead of Lessennes in the race, but the 18-year-old wins the title by 18 points ahead of Mondron.