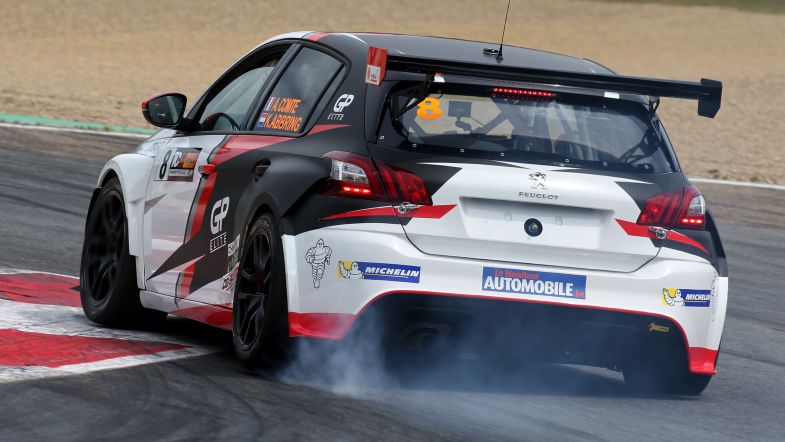 DG Sport Compétition’s Aurélien Comte has claimed the first victory for the Peugeot 308 Racing Cup in a sprint race in TCR in the third race of the day at Zolder, holding off Team WRT’s Maxime Potty for the win.

Comte leaped into the front from second on the grid in the 308 ahead of Maxime Potty’s Team WRT Volkswagen, while points leader Benjamin Lessennes threaded through from the back of the grid in his Boutsen Ginion Honda to move up to third by the first corner.

There was trouble at Turn 2 for the #4 Delahaye Volkswagen of Lorenzo Donniacuo, who was spun into the gravel and out of the race, rejoining one lap down after the safety car held the field during his recovery, damaging co-driver and championship contender Guillaume Mondron’s championship challenge.

At the restart, Comte continued to hold off Potty and Lessennes, with Sam Dejonghe just behind in the Team WRT SEAT, with the top four breaking away slightly from the chasing Bas Koeten Audis of Meindert van Buuren and Mika Morien, with Jonas de Kimpe not far behind in the DK Racing Volkswagen.

Both Morien and De Kimpe overtook van Buuren after a mistake on lap seven, while up front, Comte controlled the pace, taking the victory after ten laps, just 1.4 seconds ahead of Potty’s Golf GTI TCR.

Lessennes would finish third and score key points in the championship, and is now 14 points clear of Mondron, with the fourth and final race about to get underway with the grid as per Race 3’s result.