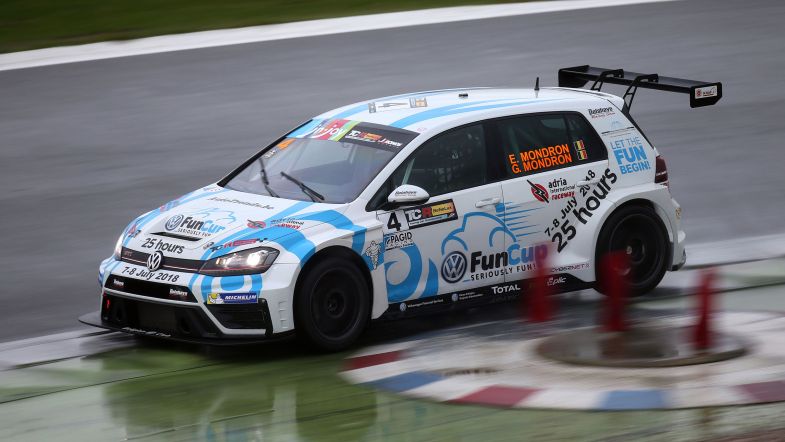 The Delahaye Racing pair of brothers Guillaume and Edouard Mondron have claimed pole position for the final round of the 2017 TCR Benelux season at TT Circuit Assen, after their aggregate times put them just 0.059 seconds ahead of the Team WRT SEAT of Sam Dejonghe and Denis Dupont.

Guillaume Mondron set the benchmark during the first stint at the Dutch circuit with a time of 2:01.042 in his Volkswagen Golf GTI TCR, with title rival Mathieu Detry close in the WRT team’s Volkswagen, however Detry’s first lap was disallowed due to a breach of the track limits.

The faster times came when the second drivers took over the cars, with Guillaume’s brother Edouard improving on his pole time with a lap of 2:00.546, but this was soon beaten by two fast laps from WRT’s Denis Dupont, with Dupont ending up on top of the time sheets with a time of 2:00.312.

Though Dupont’s time was fastest of all, the aggregate of both the Mondron brothers’ times were faster than the aggregate of Dupont and co-driver Sam Dejonghe, which puts the WRT SEAT pair on the second row, though they’re not in championship contention.

Third on the grid is the championship leading #2 Honda Civic of Benjamin Lessennes, with co-driver Tom Coronel this weekend.

Maxime Potty and Mathieu Detry will start fourth in the WRT Volkswagen, followed by the two Bas Koeten Audis.

The Peugeot 308 Racing Cup car of Aurélien Comte and Kevin Abbring has an engine issue and was forced to miss qualifying, relegating them to the back of the grid if they’re able to repair the car in time for the qualifying long race at 16:50 CET.