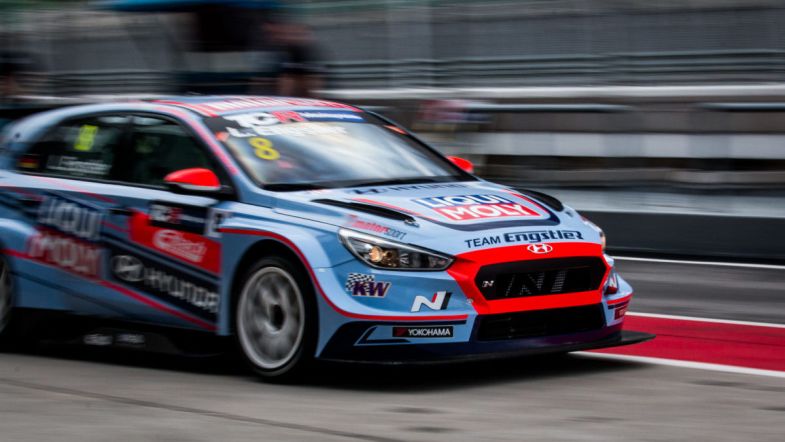 Luca Engstler doubles up in rain-delayed second race at Sepang

Hyundai Engstler driver Luca Engstler has won the second race of the day at the Sepang International Circuit, in a race which was delayed by almost an hour and a half due to severe rain.

Inbetween races, the rain hit the Malaysian circuit hard, with the officials concluding it was best for the cars to wait it out in the pit lane then try and start the race on time behind the safety car.

After almost an hour, the race began as the conditions improved at 17:15 MYT, with the race originally scheduled for 15:50.

The race ran three laps behind the safety car, before the green flag waved on lap four, with local driver Douglas Khoo leading into Turn 1 in his black and green Viper Niza Racing Cupra TCR, but he was soon passed in quick succession by the Engstler Volkswagens of Kai Jordan and Khalid Adam Bin Khalid Emran, and the Indigo Hyundai of Charlie Kang.

Kang then overtook Emran’s Volkswagen and moved up to second position.

Luca Engstler, who started sixth, was briefly challenged by the Teamwork Motorsport Volkswagen of Rob Huff, but soon became to escape, passing Khoo and Emran to move up to third, before passing both Kang’s Hyundai and the Volkswagen of Jordan at the final corner to take the lead on the second racing lap.

Engstler then went onto build a commanding lead, while Kang was able to dispatch Jordan’s Volkswagen on lap eight and make it a Hyundai 1-2. The third Hyundai of Theo Coicaud didn’t make the start of the race, after stopping with a technical issue earlier in Race 1.

Rob Huff could only manage fifth in the conditions, with his Volkswagen struggling for pace, while Paul Ip was the best of the Hondas in sixth, passing Douglas Khoo’s Cupra on the penultimate lap.

The Brutal Fish Racing Volkswagen of Martin Ryba, the Engstler Volkswagen of Henry Kwong, and the Prince Racing Honda of Michael Choi completed the top ten.

The next round of the TCR Malaysia Touring Car Championship takes place next weekend, again at the Sepang circuit.