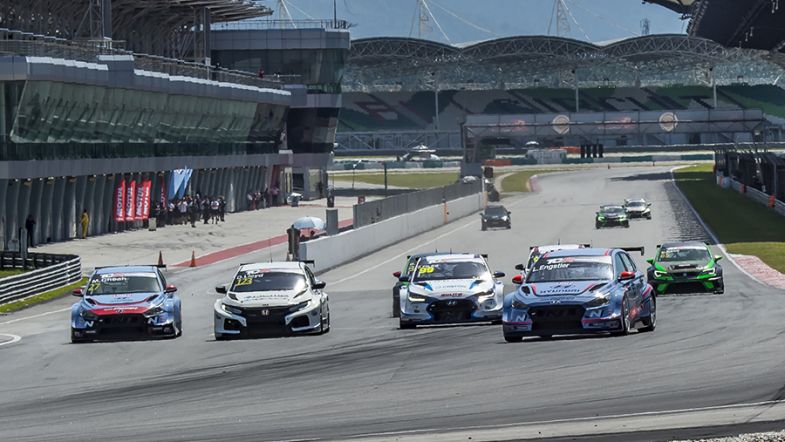 Luca Engstler has been crowned the 2020 TCR Malaysia champion after finishing on the same points as title rival Dan Lloyd following the two races of the season finale at Sepang International Circuit.

The Team Engstler driver had a perfect weekend, claiming pole position and scoring two victories behind the wheel of his Hyundai i30 N TCR.

Brutal Fish Racing driver Lloyd found himself in a tough fight with no less than four Hyundai drivers to finish second in the first race and fourth in the second race.

The result meant that Lloyd claimed 121 points, the same as Engstler, but with the title awarded to the Hyundai driver as he had more victories, four compared to one for his Honda rival.

Engstler had claimed pole position for the first race by three tenths ahead of Lloyd, with Engstler’s team-mate Mitchell Cheah in third.

The German Hyundai driver claimed a lights-to-flag victory in the first race, while there was a tough fight for second behind him.

Solite Indigo Racing driver Josh Files had managed to get past Lloyd for second behind the wheel of his new Hyundai Veloster N TCR. The two came together on the fourth lap, with Files dropping down the order to finish seventh

The reversed grid for the second race saw Douglas Khoo starting from pole position but he quickly fell down the order.

Engstler made a strong start and managed to claim the lead from fifth position on the grid by the end of the first lap to win the race by five seconds.

There was once again a tough fight for second place, with Files getting revenge from the first race to claim second place ahead of Cheah on the penultimate lap. Lloyd crossed the line in fourth position behind the wheel of his Honda Civic Type-R TCR.