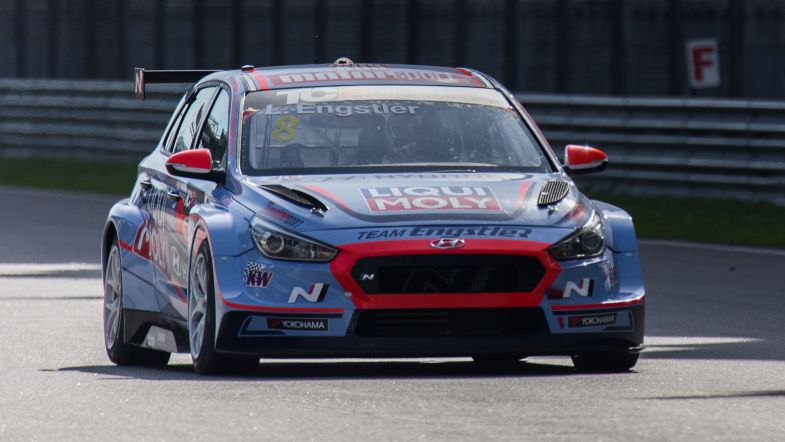 Luca Engstler finishes the 2019 season with victory at Sepang

Newly-confirmed champion Luca Engstler won the final race of the 2019 TCR Malaysia championship at Sepang, after a lightning start and a dominant performance in his Engstler Hyundai i30 N TCR, finishing ahead of team-mate Mitchell Cheah’s Volkswagen and the Honda Civic TCR of Michael Choi.

There was a short delay to the start as Andrei Abuluev in the Viper Niza Racing Cupra TCR failed to find his grid position and was forced to start from the final grid spot instead, though he was still hit with a false start penalty as a result.

Choi started from pole position for the reversed grid, but his lead didn’t even last past Turn 1, after Engstler bolted from fifth on the grid and down the inside of Choi’s Honda to take the lead, and from then on, he was unchallenged, building a 13 second lead over the course of the race.

Choi was briefly under attack from Kai Jordan’s Engstler Volkswagen, who had to start from sixth after receiving a two-place penalty for his part in the incident with Viper Niza’s Douglas Khoo on lap two yesterday.

Jordan was passed by team-mate and yesterday’s race winner Mitchell Cheah at the end of the first lap however, with Cheah then passing Choi’s Honda at the start of lap four, but that was as far as the Malaysian driver could progress, with Engstler now six seconds clear and with more pace in his Hyundai.

Paul Ip, who had started third, made his way up to seventh in the KCMG Honda Civic TCR, while Kenneth Lau finished eighth on the road behind him in the second of the Prince Racing Hondas.

There was some drama for Lau, as he was black-flagged for reasons which weren’t made clear. The Hong Kong driver didn’t come in to the pits, so Lau and the Prince Racing team manager have been called to the stewards after the race, with Lau excluded from the results.

That was the sixth and final round of the inaugural TCR Malaysia championship season, with plans for the second season to commence either later this year or early next, while the Sepang International Circuit will host the opening round of the TCR Asia Series on April 6th-7th.