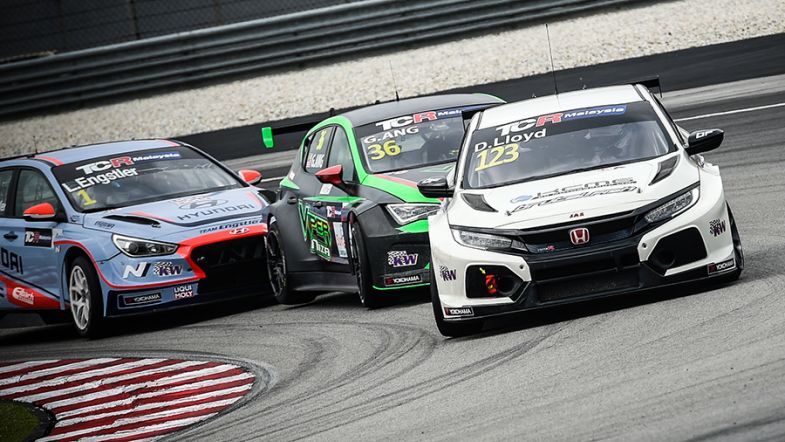 Luca Engstler and Dan Lloyd claimed one win each in the second round of the TCR Malaysia championship at Sepang International Circuit.

The first race saw Lloyd starting from pole position as Engstler, who had claimed pole, received a five-place grid drop for an engine change after qualifying in his Hyundai i30 N TCR.

Brutalfish Racing Team driver Lloyd claimed the lead at the start of the race with Gilbert Ang making his way up in to second place from third on the grid.

But it was not long until Engstler made his way up to the top from sixth position on the grid.

The Team Engstler driver spent quite some laps trying to get past Viper Niza Racing driver Ang, who defended furiously.

But Engstler eventually made his way past and quickly caught up with Honda driver Lloyd, starting a fight for the lead. The two went side-by-side going towards the Langkawi Curve, with Engstler snatching the lead thanks to superior straight line speed.

The second race had Honda driver Tommy Ku on the reversed grid pole position ahead of Ang and Cupra driver Douglas Khoo.

The lead was however not long-lived for Ku who spun in Turn 2 following contact with Hyundai driver Files.

Files soon came under pressure from Engstler, who had quickly made his way up to second place from seventh and last on the grid.

But the race came to an end for Engstler on lap eight as the Hyundai driver spun off track, forcing the safety car on track.

The field was released again with just one lap left and leading driver Files found himself in a tough four-car fight for the lead with Lloyd, Ang and Gruber.

Brutal Fish Racing driver Lloyd made a move on the outside of Files at the Kila Curve on the last lap to claim the lead.

Files tried to defend second place from Ang, but lost the position in a drag race to the finish line and had to settle for third. The Hyundai driver stated after the race that he had a slow puncture which cost him the positions.

Lloyd keeps the points lead on 87, with Engstler and Ang sharing second place on 66 points.

The final round of the 2020 TCR Malaysia season takes place at Sepang International Raceway on February 28-29th.