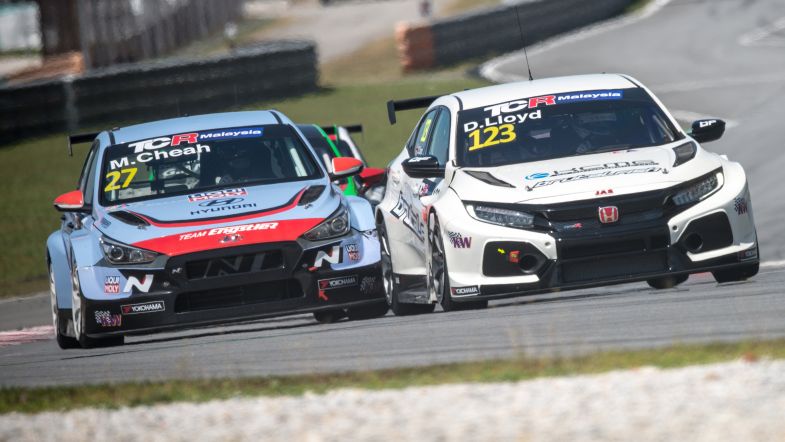 Dan Lloyd claimed the runner-up spot in the 2020 TCR Malaysia championship after finishing on the same amount of points as Luca Engstler, missing out on the title having picked up fewer wins than the German.

The Honda driver had led the standings going into the season finale, but was left frustrated over incidents on track and the speed difference with his Hyundai rivals.

“It was a real shame to finish like this,” he wrote on social media. “On top of all this, the speed difference on the straights was beyond a joke, particularly in Race 2, considering I was 30kg lighter this weekend.”

The Brutal Fish Racing Team driver posted a video, see below, showing an incident with Engstler’s team-mate Mitchell Cheah at the start of the first race and the difference in speed between the Honda and Hyundai.

“My championship rival had a new team-mate for the last round to help him and going to extent of crashing into me,” wrote Lloyd.

The Team Engstler driver was given a suspended 30-second penalty for the incident and Lloyd was given the same penalty for a later incident with Cheah and Solite Indigo Racing driver Josh Files.

“I managed to keep up with the pack at the start, then towards the end of the straight into Turn 1, I saw an opening and I went for it but (Daniel) Lloyd and I bumped into each other which let Files through,” said Cheah.

“From there I followed Lloyd and the three of us were together as Luca pulled away. At one point Lloyd tried to make a move on Files, they both went wide and I took advantage of that. I got up to second but was then taken out. From there I was just trying to keep up in third.”