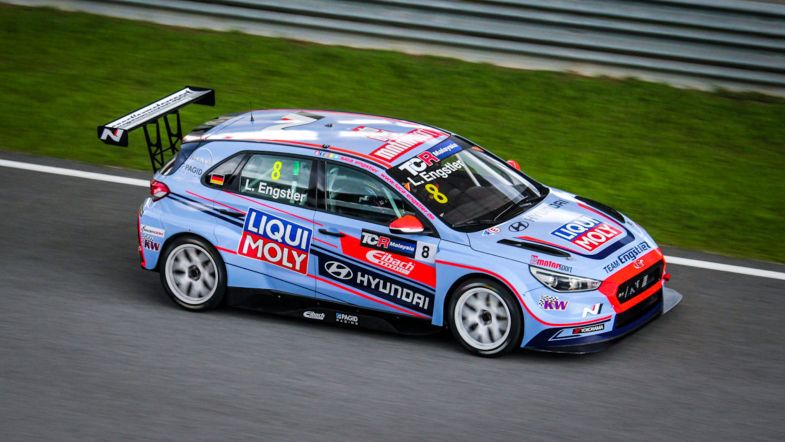 Luca Engstler wins the first race of 2019 from Rob Huff

Engstler Motorsport’s Luca Engstler won the first round of the 2019 TCR Malaysia Touring Car Championship at the Sepang International Circuit, after his Hyundai i30 N TCR snatched the lead at the start, and held on until the finish.

The current TCR Asia Touring Car Series champion made the perfect start from the outside of the front row to get ahead of the Teamwork Motorsport Volkswagen Golf GTI TCR of Rob Huff, cutting across the Volkswagen on the way down to Turn 1, while team-mate Theo Coicaud kept a watching brief in second.

It was the Brutal Fish Racing Volkswagen of Martin Ryba which had made the best start, going from ninth to fourth, while the Slovakian found Malaysia driver Douglas Khoo wasn’t far behind him in the Viper Niza Racing Cupra TCR, after Charlie Kang made a bad start in his Indigo Racing Hyundai, and dropped from fourth to tenth.

Kang’s race was soon over, after he was being held up behind the other Engstler Volkswagen of Henry Kwong, he was attacked by Khalid at Turn 12, who hit his car up the inside and knocked him into retirement.

A lap later and two cars stopped on track, the KCMG Honda of Paul Ip out of seventh, as well as the third-placed Hyundai of Theo Coicaud, which caused the safety car to be deployed.

The race restarted on lap eight, with four laps left of racing, and Huff was applying pressure on Engstler straight away, with the two running side-by-side through the middle section on lap nine, but Engstler was able to hold his nerve and edge ahead, before going onto to build a near two second lead to take the victory.

Martin Ryba completed the podium, just ahead of Douglas Khoo’s Cupra, with Kai Jordan the best-placed of the Engstler Volkswagens in fifth.

The second race of the weekend takes place at 15:50 local time (08:50 CET), with the top eight from qualifying reversed, putting Douglas Khoo on pole position.