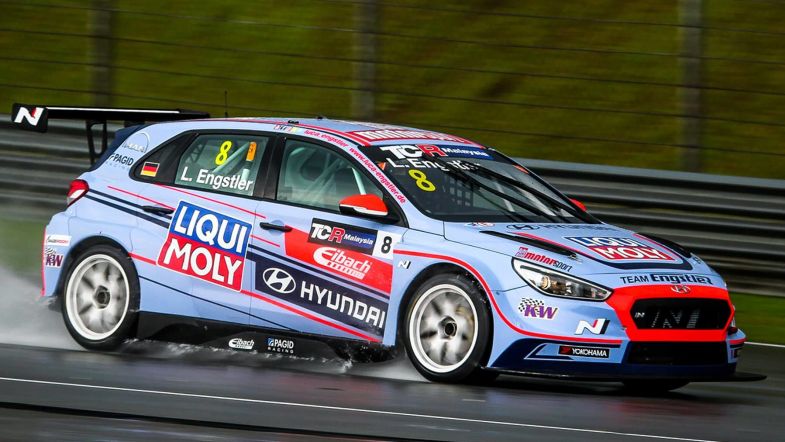 Luca Engstler made it four wins from four races in the 2019 TCR Malaysia Touring Car Championship, going from seventh to first in one lap under the floodlights at the Sepang circuit.

After the earlier race was red-flagged after seven laps due to heavy rain, the conditions had cleared up a little for the second race, with Slovakia’s Martin Ryba starting from pole position in the Brutal Fish Racing Volkswagen Golf GTI TCR.

Michael Soong’s Engstler Hyundai again was not able to take part in the race, with nine cars making the start.

The 18-year-old Engstler needed just a few corners to power his Hyundai i30 N TCR into the lead, from effectively seventh on the grid following Soong’s withdrawal, with Volkswagen team-mate and chief title rival Kai Jordan following him from sixth to second place on the same lap.

Engstler went on to win the race by over 30 seconds ahead of Jordan, while Brendan Paul Anthony was again a fast mover, with the Malaysian passing Martin Ryba’s Volkswagen on lap two to move up into third, helping to achieve the Engstler Motorsport team’s first 1-2-3 result of the season.

Douglas Khoo passed Ryba’s Volkswagen on lap five to move up into fourth in the sole Cupra TCR, run by South Korean squad Viper Niza Racing, with Ryba holding off Michael Choi, the best-placed of the Honda drivers, to take fifth at the finish.

Engstler’s victory means he now has a 41.5-point lead over Jordan with 55 available at the season finale, which will again be held at Malaysia’s Sepang International Circuit, on February 24th-25th.