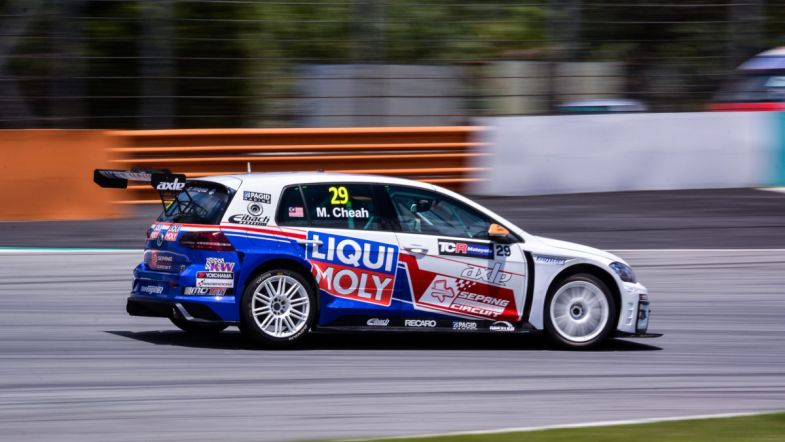 Engstler Motorsport’s Mitchell Cheah snagged pole position for the final round of the 2019 TCR Malaysia championship on his first appearance, with the Viper Niza Racing Cupra TCR of Douglas Khoo a surprise second, with championship leader Luca Engstler third.

It was KCMG Honda driver Paul Up that set the pace in the first part of qualifying, placing his Honda Civic Type R FK8 TCR fastest with a time of 2:16.289, while Cheah, driving the same Volkswagen Golf GTI TCR he raced last year in the TCR Asia series, just set one lap right at the end of the session and slotted into second, just ahead of the Hyundai i30 N TCR of team-mate Luca Engstler.

In Q2, Cheah became the first driver to go under 2:16, grabbing a comfortable pole position with a lap time of 2:15.712, with Engstler looking set to qualify in second, until a final flying lap by Malaysia Douglas Khoo put him second in his Cupra TCR.

Engstler, who is likely to wrap up the championship later today in the first race, would have to settle for third, after having his best time from Q2 deleted due to a track limits violation.

Paul Ip was the best-placed of the Hondas in fourth, ahead of Engstler’s closest title rival, Kai Jordan.

Andrei Abaluev was sixth fastest on his TCR Malaysia debut in the second Viper Niza Racing Cupra TCR, ahead of the two Prince Racing Hondas of Kenneth Lau and Michael Choi, with Choi scoring the reversed grid pole position for Race 2 on Sunday.

Michael Soong was ninth in his Engstler-run Hyundai, with newcomer Mark Darwin tenth in the last of the Engstler cars.

The two Volkswagens of Brutal Fish Racing’s Martin Ryba and Teamwork Motorsport’s Cherry Cheung missed the cut to make it into Q2 and will start 11th and 12th respectively.