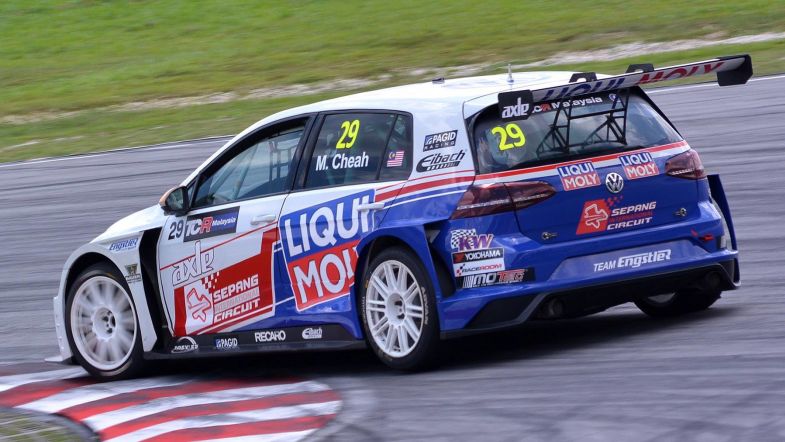 Mitchell Cheah stopped Luca Engstler’s uninterrupted run of wins in the TCR Malaysia championship with victory in Race 1 at the season finale at Sepang, but second was more than enough for the 18-year-old German to win the 2019 drivers’ title a day early.

Newcomer Andrei Abaluev from the TCR Russia championship stalled at the start from the mid-pack and dropped to dead last, while his Viper Niza Racing team-mate Douglas Khoo had a slow get away too from second on the grid, with Luca Engstler straight past him in his Engstler Hyundai and hounding team-mate Mitchell Cheah’s Volkswagen for the lead.

The two drivers went into Turn 1 side-by-side, but Cheah kept the advantage and came out ahead, and from there the Malaysian driver led the whole race just ahead of Engstler, who kept him honest throughout.

Paul Ip had moved up to third in the KCMG Honda Civic TCR, while Khoo was down to fourth and had the Engstler Volkswagen of Kai Jordan right behind him.

Jordan, who was Luca Engstler’s only remaining rival for the title, tried to pass Khoo’s Cupra TCR at the end of lap two, but they clipped wheels with Khoo spinning off wide, and Jordan out with suspension damage, with Engstler wrapping up the title very early on.

Local driver Mark Darwin worked his way up to fourth in his Engstler Volkswagen, while the Brutal Fish Racing Volkswagen Golf of Martin Ryba had an eventful race in fifth, first fending off the recovering Cupra of Andrei Abaluev, until the Russian made a mistake on lap eight and dropped back, eventually retiring with two laps to go, with the challenge then picked up by Kenneth Lau in he Prince Racing Honda Civic TCR.

Cheah went on to win the race two seconds clear of Engstler, with Ip having a quiet run to third in his Honda.

Mark Darwin finished fourth, while Lau snatched fifth at the line after a great exit from the final corner, crossing the line just six-thousandths of a second ahead of Ryba’s Volkswagen.

Cherry Cheung finished ninth on her TCR debut in the Teamwork Motorsport Volkswagen, with Douglas Khoo completing the top ten, a lap down after his troubles on the second lap.