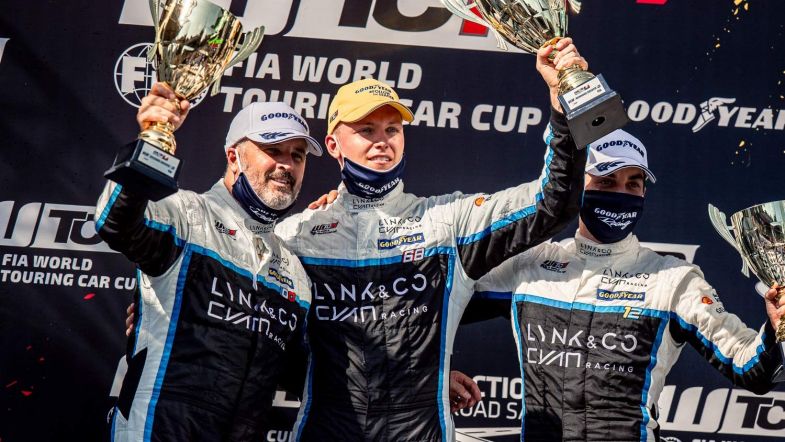 The outcome sees Ehrlacher wrap up the weekend at the top of the WTCR drivers’ standings, backing up his seventh place in Race 1.

Berthon kept the lead off the line at the start, while fellow front row starter Ehrlacher defended hard from Berthon’s Comtoyou Racing team-mate Gilles Magnus on the opening lap to keep second place.

Further back, Race 1 podium finishers Attila Tassi and Thed Björk collided at the Boutsen chicane, with Tassi striking the infamous tyre stack and Björk being half-pitched into the air.

Björk retired on the spot with broken suspension, while Tassi was able to continue but dropped to the back of the field. The incident triggered an early safety car intervention, and is being investigated by the stewards after the race.

The race restarted on lap four, just as notice arrived that Berthon had jumped the start and was handed a drive-through penalty.

The Frenchman took his punishment a lap later, releasing Ehrlacher into the lead ahead of Magnus, Muller and Urrutia.

That order stood until the very closing stages, when rookie Magnus came under increasing pressure from ultra-veteran Muller and eventually slipped up at the tricky Boutsen complex.

Magnus overshot the chicane and was forced to take to the mid-corner run-off, allowing Muller up to second, and later appeared to make little resistance as Urrutia swept by for the final podium position.

Magnus finished fourth, still a solid result in front of his small home crowd of 200 people allowed to visit the Belgian event.

Berthon, meanwhile, put in a commanding comeback to 14th and some consolation points, and also set the fastest lap of the race.

Race 1 winner Néstor Girolami capitalised on the misfortune of his rivals to rise from tenth on the grid to fifth at the flag, spending the majority of his time fending off the faster Comtoyou Audi of Tom Coronel.

Coronel pushed hard in his pursuit of Girolami’s Münnich Motorsport Honda, even running off the track at one point at Terlamenbocht, but could not find his way past and finished sixth.

Münnich Motorsport fought a separate battle against time to replace the engines that blew up in spectacular fashion for drivers Esteban Guerrieri and Tiago Monteiro in Race 1 earlier in the day, and both eventually did make the Race 2 start.

Due to a break of parc fermé regulations, required to carry out the necessary work, the two team-mates were forced to start at the back of the 22-car grid, but did well to recover into the points-paying top 15 with Guerrieri 13th and Monteiro 15th.

Hyundai had a slightly better race this time, able to draw on their rivals’ misfortunes, with Norbert Michelisz, Nicky Catsburg and Luca Engstler rounding out the top ten.

The race finished under a second safety car, triggered by the recovering Tassi attempting a move on Jack Young’s Vuković Renault at the Villeneuve chicane two laps from home.

Young was punted into the gravel trap and could not resume, effectively ending the race.