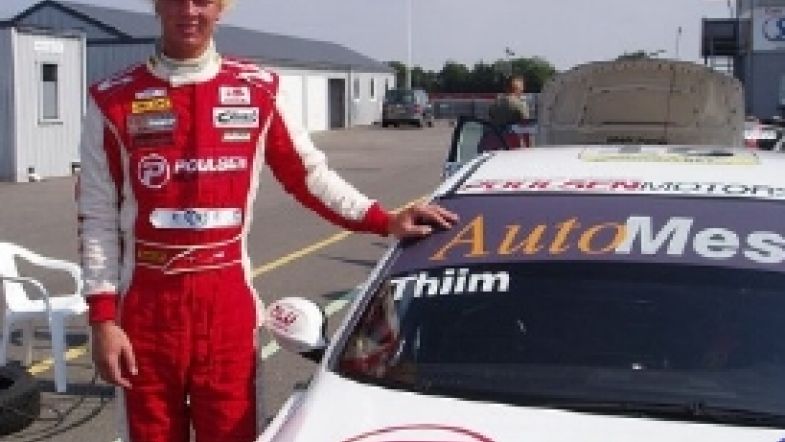 There will be a new and young name on the Danish Touringcar Championship entry list, when the season restarts after the summer break in a week and a half. 18 year old Nicki Thiim, Sønderborg, will be making his debut in one of Europe’s leading touring car series, where he will be driving Poulsen Motorsport’s BMW 320i E90 usually used by his father Kurt Thiim, Luxembourg.

Daddy, however, has numerous commitments outside the Danish Touringcar Championship, and he will not be able to drive for his regular team in round five of the series. During the summer break the idea of replacing him with his son arose, and following a successful test Tuesday at Padborg Park it was decided to give the teenager his DTC debut.

In the three recent seasons Nicki Thiim has become a well known name among the audience at rounds of the Danish Touringcar Championship, as he has been driving in the Formula Ford support class. In 2004 he made his debut in this class at the age of 15, and when he had his first race in the class in Denmark – at Padborg Park actually – he duly won. He managed to notch up a hat-trick, but then his season turned sour and he had to make do with fourth place in the championship.

In 2005 he also ended up fourth overall in the Danish Formula Ford championship, but last season he made a giant leap forward. After a long and hard battle with veteran Anders Ole Egebart, Beder, he won the Danish title, and as he was top youngster in the field, Ford of Denmark as well as the Danish motorsporting federation sent him off to drive a fully sponsored works Ray at the Formula Ford Festival, where he finished eighth in the Duratec class.

This year Nicki Thiim has been driving in Germany. He takes part in the Seat Leon Supercopa, which is one of the regular DTM support classes, where he is currently holding fourth position after wins at Oschersleben and Norisring as well as a maximum score after a guest driver at Mugello. On top of this Nicki Thiim has also recorded a class win in one of his two entries in the German VLN endurance series.