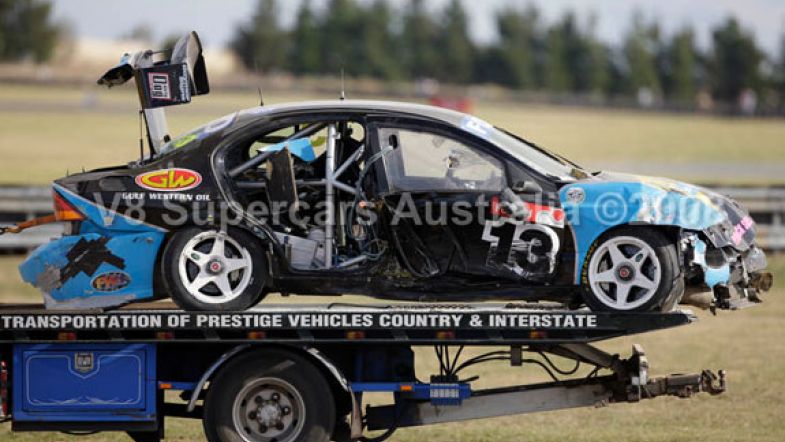 Colin Sieders’s Ford Falcon AU was destroyed in the 10-car pile-up in the second round of the Fujitsu V8 Supercars at Wakefield Park.
The crash soured what was his best weekend, qualifying inside the top 50 percent of the field the first time he has ever achieved that feat. Qualifying 15th, Sieders went on to finish 21st and 12th in the first two races before the car-destroying crash.

After initial investigations of the crash damage incident, the Falcon is a write-off.

With the AU Falcon now on its way to race-car heaven, Colin is weighing up his options for the reminder of the season.

Colin could only joke: “It looks like a little Ford Fiesta! It’s not too good. The car’s gone.

“Mark McNally was in the middle of the track, the rest of us were coming through the track like normal and you simply couldn’t see a single thing.

“It’s amazing that no one was hurt in it. I was holding back on the steering
wheel. Anytime a V8 dropped a wheel anywhere on the track, there was dust every.
It didn’t matter what corner it was, there was the potential for dust to fly
up.

“The best way to fix it would be to have Astroturf on the inside and outside of every corner. They’d be no dust if they were there. We don¹t really know what we’re going to do. There’s a few options out there for cars, but there’s a few things to weigh up.

“Up until that last race, it was the best weekend we¹ve had. Except for an incident with Michael Trimble where I was spun around in the first race, it was the first time that I¹d been inside the top 50 percent in every session. The car was awesome. It’s really disappointing that the weekend has ended with a destroyed race car.”

In the second Sieders Racing Team Falcon, David Sieders finished a promising 10th in the last race after a difficult weekend.

It was a case of making the car better and better as the weekend went on. The team made a wrong set-up call in Practice 2, costing David most of the session. It hurt them in qualifying, as they were unable to make the necessary gain to stay with the front-runners.

Race 2 looked promising, but a throttle issue saw him drop a couple of spots.

In Race 3, Sieders damaged his Falcon in the first turn carnage, but was
able to avoid any serious damage to take 10th place.

“We were a session behind heading into qualifying, and it made the rest of the weekend tougher,” David said.

“We made a wrong call in Practice 2, so we didn’t get enough gain out of the new tyres. It was a shocker. By the time we got to the last race, the car was quite fast. We could do 59 second lap times, which is what all the leaders were doing.

“The crash at the start of Race 3 was hectic. I went to the outside to get past everybody, and Karl Reindler followed me to miss McNally and there was a clash. It was circumstance, more than anything, but we were pretty lucky to get away with it.

“I feel sorry for Colin (David’s older brother). He had his best qualifying and his car is leaving the track in a smouldering heap. I hope we can sort something out for him for the rest of the year.

“For the next round, we just need to get things happening in the chassis department on the Gulf Western Oils Falcon.

“The next round is at Sandown, and a few of the drivers have experience there (through the V8 enduros). We’ve got a few things planned for there already. I have a bit of experience there in Aussie Racing Cars and Formula Fords, so I hope we can make an impact.”