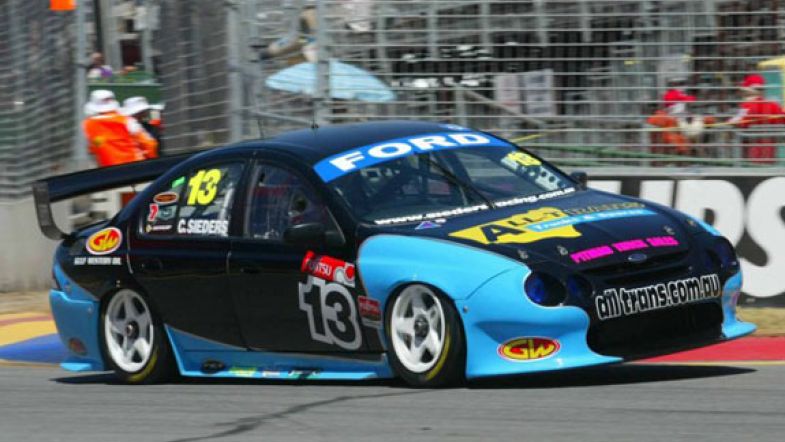 AFTER almost destroying his Ford Falcon AU V8 Supercar at Wakefield Park last month, Colin Sieders has leased a Britek Motorsport Falcon to compete in the next round of the Fujitsu V8 Supercar Series at Sandown Raceway June 9th.
Sieders, from Yarramundi, NSW, was involved in a 10-car pile-up at turn one of the final race at Wakefield Park. His AU Falcon was initially written-off, but a closer inspection will see the team salvage the wreckage.

But despite the seven-week gap between rounds, there isn’t enough time to rebuild the car in time for Sandown, which is why Sieders has sealed a deal with Jason Bright’s Britek Motorsport to lease a car for Sandown, with a view to using it for the remainder of the FV8 season.

“I can’t wait to race the car,” Colin said. “It’s not a brand-new car, but it’s going to be the most current V8 Supercar I’ve ever raced before.

Sieders has never raced a BA Falcon before, and has only even completed three laps in his team-mate and younger brother David’s Gulf Western Oils BA.

“It will be my first race in a BA, so I’m not expecting to win, but it’s a big step forward from what I’ve been driving.”

Colin is likely to get his first chance behind the wheel of the Britek Falcon (ex-2007 Alan Gurr chassis) at his home test track, Oran Park, before competing at Sandown.

Colin added: “Jason and his team has really looked after us on this deal. It was too good of an offer to refuse and we thank them for their help in our situation.

“It’s going to be great. We’ve never had data from a main series team before so that is going to be heaps better for us. The car will come with a set-up, so we’ll be starting the weekend on the right foot. I’ll be able to overlay my data with some of Jason’s and that will tell me where I can improve. It will be a lot easier.

“My aim is that I want to be inside the top 10. I’d like to be further up, but I won’t really know its true potential until I sit in it and drive.”