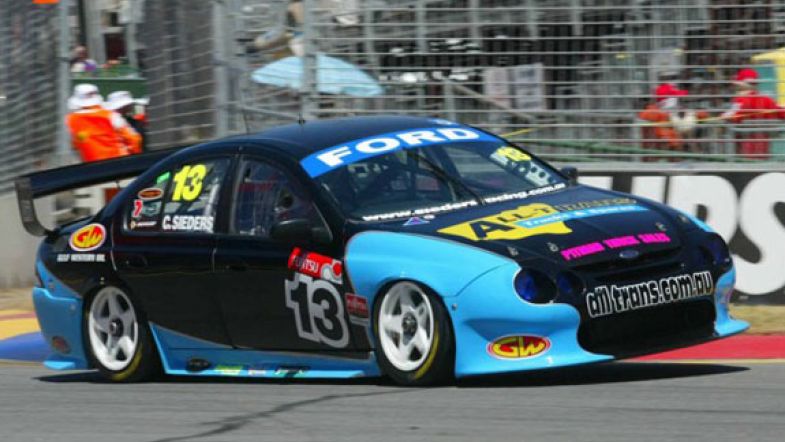 COLIN Sieders has experienced his first taste of the Britek Motorsport Ford Falcon BA that he will race in the next round of the Fujitsu V8 Supercar Series at Sandown Raceway, Victoria.
After almost destroying his AU Falcon in the multi-car startline accident at the last round of the championship at Wakefield Park, Sieders clocked-up over 50 laps of the Oran Park raceway as he prepares for his first Fujitsu V8 race in a BA.

Britek team owner and Bathurst winner Jason Bright was on hand at the test to oversee Colin’s first laps in the car.

“It all went well,” Colin said.

“The car is a lot different to my old AU. The handling characteristics are a lot different. It seems to be a lot more stable and consistent. I think as the weekend unfolds, we’ll be able to turn it into quite a fast race car.”

The Sieders Racing Team has leased the Britek chassis for Sandown-only, with a view to using the car for the remainder of the season.

“I’m very glad we decided to lease this car off Jason and his team. His influence is incredible and his knowledge is endless.

“He (Jason)sets his cars up to suit his style of driving, and that is so different to what we have been using in the past. It’s a matter of me adapting my style to get the most out of the car. That’s going to a be a challenge, but it’s something that’s not impossible.

“And the set-up path that we’ve been heading with Dave’s car is very similar to the way that Jason has set-up his cars. I think that’s given our team a bit of confidence that we’re going in the right direction.”

Colin is hoping that the new car will propel him further up the grid, after a career-best qualifying performance at Wakefield Park. The New South Welshman qualified inside the top 50 percent of the field, but while that result may not sound ideal, considering his aging car, it was an extraordinary effort.

“I just want to make sure I’m in the top 50 percent in qualifying, and then try and be in the top 10 by the end of the weekend. That would be the best result for us.

“I think as the weekend goes on, I’ll get more comfortable and quicker and quicker.

“I’d say the usually guys will be up the front, but especially the guys with Level 1 experience – Steve Owen, Dean Canto and Jack Perkins will be the front three. Other than that, everyone else should be fairly even. Anyone who has good power and good brakes should go well.”

Both of the Sieders Racing Team Falcons tested at Oran Park. Colin’s younger brother David, driving the Gulf Western Oils-backed Falcon BA, clocked some impressive times at the Sydney track and heads to Sandown with a positive outlook.