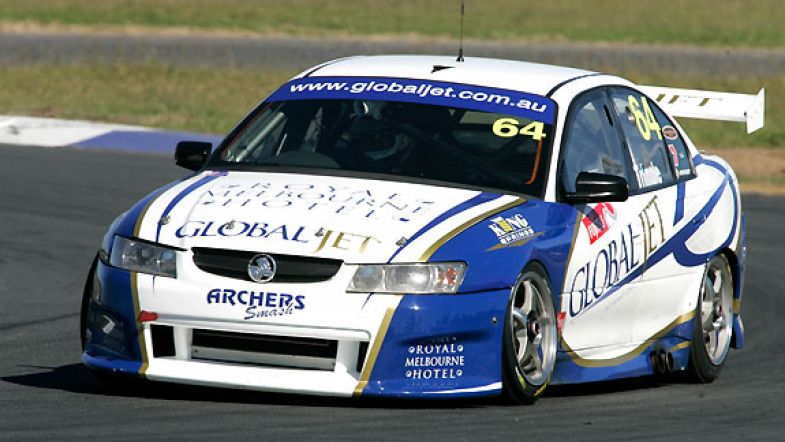 Trimble gets inside top ten

Global Jet International V8 Supercar driver Michael Trimble has finished inside the top ten in the 2008 Fujitsu V8 Supercar Series despite a challenging round at Sydney’s Oran Park last weekend.
Trimble, who made his debut aboard a V8 Supercar during the opening round of the series in Adelaide during February, was one of the star performers in the series during the first few rounds.

After his debut round the Gold Coast-based driver was placed fifth in the series standings. Trimble then showed more speed as he continually came to grips with the characteristics of the #64 Global Jet Commodore by climbing to third spot following round two at Wakefield Park.

Round three at Sandown in Melbourne was looking to be a ‘break-out’ round for Trimble. He had earned a front-row start for the final race and had the round win within his reach. Unfortunately, when he was spun by a fellow competitor mid-way through the race it ended his shot at the podium.

Over the ensuing three rounds Trimble enjoyed some mixed results while showing glimpses of his true potential.

In the final round at Oran Park last weekend Trimble battled to get a handle on the set-up aboard the #64 Global Jet Commodore to qualify in 14th spot. His weekend performance then took a turn for the worse when his engine began to overheat in the extreme temperatures faced by competitors in the opening race.

With yesterday’s second race held in contrasting conditions to Saturday’s event following a heavy rain showed just prior to the start, Trimble endured a fogged up front window forcing him to the pit area for it to be cleared and effectively ending his charge towards the front of the field.

“I’ve been left wondering what could have been really. After the first three rounds I was second in the points and knew that I still had a fair bit of improvement within my driving to come,” said Trimble.

“My driving has certainly improved over the year but for a variety of reasons we just didn’t get the points on the board to stay right up the pointy end of the standings.

“To have finished fifth on debut was certainly a highlight for me, given the fact that I’d only had one day of testing in a V8 Supercar prior to the start of the year. While finishing inside the top ten overall is a good result, and a lot of people would be happy with that, I know that I have got a lot more to offer.”

Steve Owen won this year’s Fujitsu V8 Supercar Series as Jack Perkins took out the victory at the final round.

Trimble’s focus has already turned to finalising his plans for next year as he looks to build on the experience gained during his rookie year during 2008.