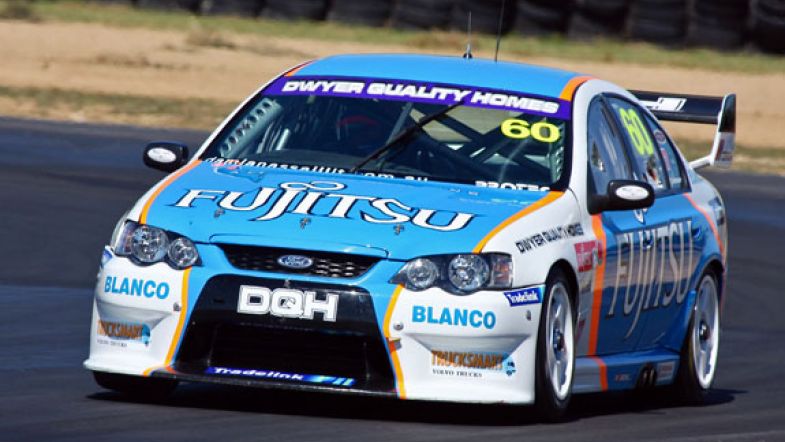 Former Bathurst winner Jason Bright was on hand to advise Damian Assaillit at a recent test at Sydney’s Oran Park as the 18-year-old preapred for the third round of the Fujitsu Series at Melbourne’s Sandown International Raceway on 7-9 June.
Bright was able to provide Assaillit with invaluable advise as part of Fujitsu’s racing program in V8 Supercar competition.

“It helped cement in my mind that I’m heading in the right direction but certainly need to improve in some areas,” said Assaillit.

“Our car is different to his – but his ideas on how best to approach setting-up the Ford Falcon was really good.

“We have not raced since early April, so to actually get back in the car was excellent. On top of that to have Jason at the test resulted in a major step forward for the whole team.

“In terms of the car itself we have made some progress. The guys have worked really hard on the overall balance of the car and that should put us in a stronger position for Sandown.

“It’s a new track for me, but there is plenty of experience in the garage, plus Jason is racing that weekend so I can call on him if required.”
Bright took a lot of positives from the Oran Park test.

“It’s always good to drive different cars and certainly we want to give them as much assistance as possible,” said Bright.

“For Damian it was a very good experience. Importantly he’s not doing too many things wrong, but certainly getting extra advice on driving and how to communicate with his engineers is good for him going forward.

“Whether it’s the championship series or the Fujitsu Series, Supercar racing is very competitive. Finding that extra bit of performance from yourself and the car can make all the difference.”