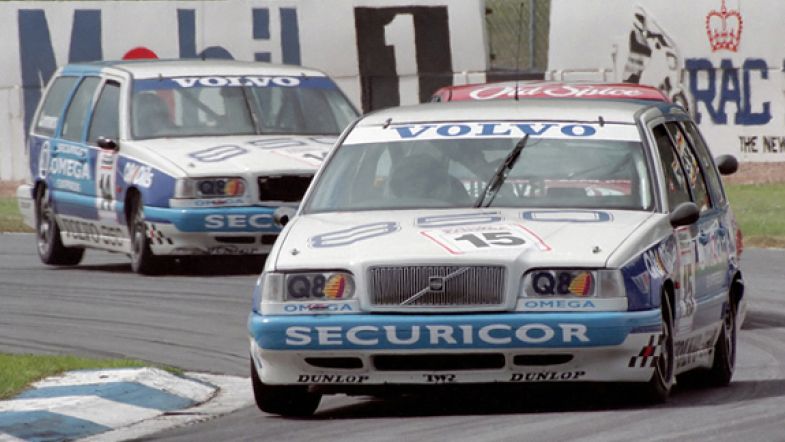 After featuring six saloons in The Road Going Cars of Touring Car Racing, it’s time to switch our attention to a slightly different type of car, the Volvo 850 Estate. It may not have been one of the most successful touring cars of all time, and it may be a car most associated with carrying a Labrador than touring Oulton Park at speed, but the 850 Estate managed to become one of the most iconic and talked about cars of the 1990s thanks to its BTCC exploits.

Having quit the ETCC at the end of 1986, by the early 1990s the success of Gianfranco Brancatelli and Thomas Lidström in the 240 Turbo were a distant memory for Volvo. The companies Senior Vice President Martin Rybeck however wanted a return to motorsport to boost the image of Volvo, and he believed, that in the BTCC, he had found the perfect opportunity.

The car that Rybeck persuaded the board would be right for the challenge was the 850, but rather than the Estate being chosen entirely as a marketing gimmick, it in fact was a choice born out of chance and development, leading to massive media exposure for the car. 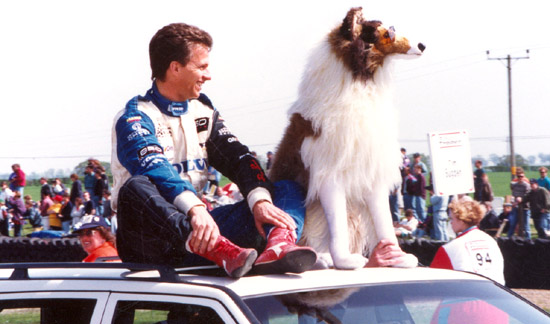 Designed by Jan Wilsgaard, Volvo’s Chief Designer from 1950 to 1990, the 850 was produced between 1992 and 1997, becoming the first front wheel drive Volvo to be exported to North America and credited with giving the Swedish manufacturer its high end reputation on the continent.

Built in Volvo’s Torslanda plant in Sweden and their Belgian factory in Ghent, the 850 featured a large interior capacity despite its snug exterior design, partly achieved through the transverse mounting of the engine. 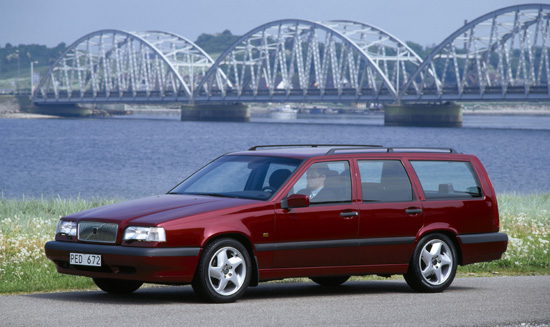 In the US this engine was an aluminium 20-valve, five-cylinder model, with a more economical 10-valve model available and popular in other markets.

An uprated T-5R version was launched in 1995, with a special Bosch ECU boosting the cars BHP to 240. Available in a, curious, range of three colours (black, emerald green metallic and cream yellow!), only around 5,500 versions were made, with just under half of these ending up Stateside, where 850 ‘Wagons’ were the subject of rave reviews for their sporty appeal and handling.

For the final two years of production the top spec model became the 850R, with a larger production run and thankfully a wider choice of colours! Heavily revised suspension aimed to improve the comfort further, while performance was boosted with a new intercooler and a larger Mitsubishi turbocharger.

The final year of the 850, before the V70 superseded it as Volvo’s estate model, saw a five-cylinder VAG turbo diesel available, while an AWD model was also introduced with a new low-pressure turbo engine.

The car wasn’t all about speed either; in addition to the now typical safety features found in modern vehicles the 850 scored a world first when in 1995 it became the first car to offer side airbags (SIPS).

Rybeck decided that the obvious place to re-launch Volvo as a motorsport brand was the BTCC, with long-term Volvo specialist Steffanson Automotive (SAM) being entrusted with the job of proving that the 850 could be termed into a competitive prospect.

The story goes that SAM were asked to collect an engine and body shell on which to base their test mule, however on the day SAM representatives arrived at the Volvo factory only estates were available. So, rather than delay the project, a long tailed body shell was taken away.

Eventually saloon and estate versions were tested back-to-back in SAM’s Göteborg wind tunnel, with the results showing that the latter offered better down force because of its long, flat roof. Whether this is in fact true is another matter, but for sure the down force generated by the estate could not have been significantly worse than the saloon, otherwise Volvo’s motorsport return would have been hobbled from the off.

TWR were brought on board, and towards the end of 1993 Volvo confirmed their BTCC debut, with both estate and saloon versions being displayed at the Swedish Motor Show in January ’94. At the Geneva Motor Show in March the news that surprised the motorsport world was announced, it would be the 850 Estate that would take on the BTCC.

Designed by Richard Owen, who penned the Jaguar XJ220, the TWR prepped car didn’t turn a wheel until a week before the first round during a test at Snetterton. Extensive modifications were made to the road going 850, with TWR designing a special gearbox, which allowed the engine to be lowered and moved back to move its weight behind the front axle. Space was found in the engine bay for this because of the room Volvo had allowed under the bonnet in the standard model to fit turbo chargers in higher spec 850s.

The driver was also moved to a lower and more central position, involving extending the pedals and steering column.

In its 1994 debut season the 850 Estate achieved a best finish of fifth, while both Jan Lammers and Rickard Rydell recorded thirds in qualifying during the course of the season, with the team finishing the year in sixth place in the standings.

Despite its powerful engine, the car’s poor aero let the car down; indeed one only has to glance at the frontal view of the 850 to see why! A rearward weight distribution, meaning a lack of weight over the front wheels also inhibited the cars performance in slow corners, though after testing the car post-season, Tim Harvey praised the machines handling. 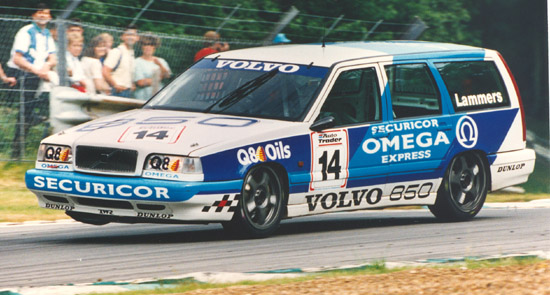 With the Alfa Romeo 155 having ushered in an era of aerodynamic devices, and the introduction of new rules regarding aerodynamics and roof lines made the saloon a better choice (or if you’re cynically minded provided a good excuse to change!) and so after one year, and many column inches, the experiment was over, and the 850 appeared in more conventional saloon guise (see photograph below) allowing Rydell to take four wins and challenge for the championship alongside new teammate Harvey. 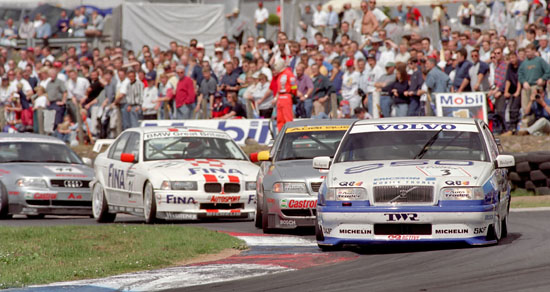 The estate though remains one of the most iconic and talked about cars of the Super Touring era, and while its performances on track may have been forgotten, the car itself is in no danger of falling out of memory.

For many, the idea of racing an estate car was laughable but for Volvo it would provide them with the level of media exposure they were looking for, both then, and now, for the fact that the 850 is still discussed in articles like this, is testament to the machines marketability.

Just three Estates were made (aside from the original SAM prototype), with all appearing in the BTCC during 1994. The first chassis then spent a period in Australia before returning to Sweden where it was rebuilt and restored to its original livery before being placed in storage.

The second remains on display at the Volvo museum in Göteborg while the third model was re-shelled as a saloon and used as a test hack ahead of the 1995 campaign.

As both a road going car and a touring car, the 850 helped move the perception of Volvos away from being safe and uninspiring cars towards being seen as a ‘cooler’ and sporty brand. The continuing presence of Volvos in touring car racing is a testament to this, although it will probably be some time until we see the marque lining another estate car up on the grid, however good the road going model is.