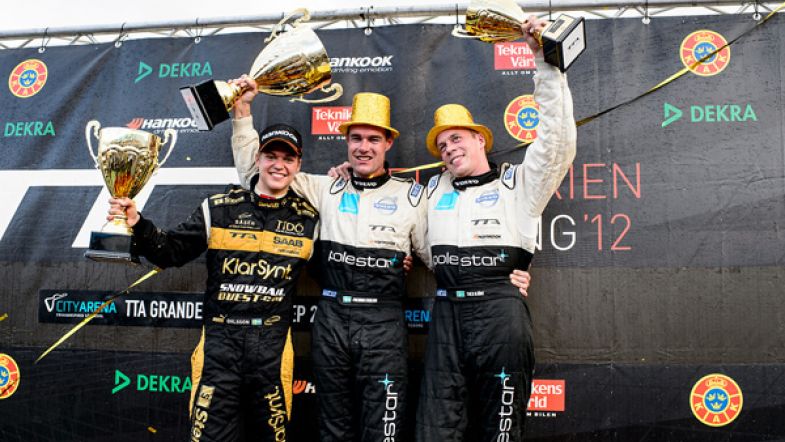 Fredrik Ekblom: “One of my very best titles”

Fredrik Ekblom secured his fourth major Swedish racing title with the TTA – Racing Elite League 2012 crown.
“This is one of my very best titles and this season has been incredible. Everyone has got the same basic concept here. So now no one can say that I took the title because I had turbo or rear-wheel drive,” said Ekblom.

The Volvo driver has not been worse than fifth this year, claimed two victories and a total of five podium finishes in eight races.
“I haven’t been worse than fifth in a race, we have secured all three titles and I have claimed two wonderful victories. Volvo Polestar Racing has delivered on top level in all situations and I want to give the team a big thanks,” said Ekblom.

Ekblom headed to the final race of the year at Gothenburg City Arena only needing one point to become unbeatable from his only title rival in the form of young Linus Ohlsson. The 42-year-old made swift business of it by claiming third on the grid and the bonus point that comes with it.
“I had a hard time gathering my emotions after the qualifying session when we took the title. It has been so close, it has been tough. We’ve had the best possible conditions, but there are so many things that can go wrong, especially at this track. But it just feels so damn good,” said Ekblom.

Christian Dahl, Team Manager and owner of Polestar Racing, was happy after the season final.
“We have won in one of Sweden’s strongest ever championship. More or less all of the 16 drivers are fast enough to win races. There are no excuses and it is with great pride that we accepted the trophies for all three titles,” said Christian Dahl.