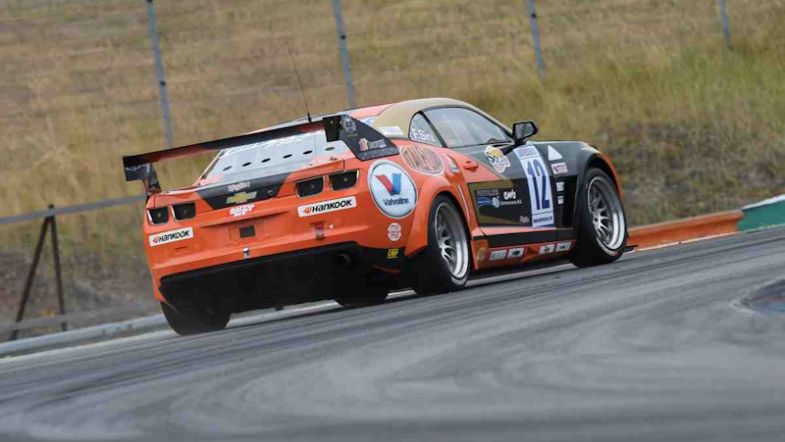 Francesco Sini won the final race of the day at Brno. The Italian took his Solaris Chevrolet Camaro to its second win of the season after the huge shunt – and the subsequent rebuilding of the car – suffered at Mugello.

Nicola Baldan came home a good second to keep his Mercedes C63 AMG Coupè in the championship lead as Max Mugelli completed the podium for BMW. Race 1 winner and local hero Tomas Kostka retired after having been handed a drive-through penalty due to a contact with Audi team-mate Ermanno Dionisio.

At the start Diego Romanini took the lead in his Mercedes C63 AMG, just ahead of Baldan in the coupe version of the German car. It was then that Kostka and Dionisio came together, which ultimately led to the Czech driver being handed a drive through penalty.

Romanini briefly tried to defend from Baldan but, after almost pushing the Roma Racing Team driver out in the process, had to surrender to the championship leader, shortly followed by Sini and Kostka. The Czech driver was given the penalty, which left Baldan and Sini fighting for the lead.

The Chevrolet driver eventually made it through the Mercedes and started building a gap from Baldan, who went conservatively to second ahead of an all-BMW trio led by Max Mugelli by a huge margin.

An entertaining battle between Niccolò Mercatali and Maurizio Copetti saw the two finishing in the order despite Copetti’s efforts to pass his team-mate. Diego Romanini slipped down to a distant sixth as Giovanni Lavaggi took seventh in his Lexus. Despite some huge problems leading to several pit-stops, Ermanno Dionisio was classified in eighth.

The EUROV8 Series will now enjoy an enormous break, going back on track at Sachsenring on September, 21st. As mentioned before, the two races will be replaced by a single, longer race.