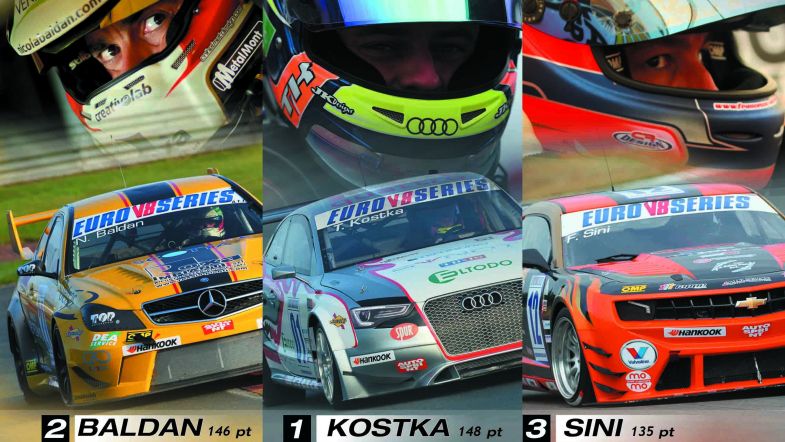 The EUROV8 Series is ready for the last event of the season at Hockenheim, Germany. The finale will also be the title decider, with Audi Sport Italia’s Tomas Kostka leading by just two points from Nicola Baldan’s Mercedes C63 AMG Coupè. Francesco Sini will have to make up for a 13 points disadvantage from the leader, but his Chevrolet Camaro is still in full contention ahead of the race.

The track has historically played in favour of Mercedes, so much that the first double header held at Hockenheim was won by Luigi Ferrara in a C63 AMG. The rain might come into play however, which would modify the levels in the field towards the 4WD Audi RS5. The Chevrolet proved to be a strong contender on fast layouts as well, so Sini is expected to have a good car in his hands, and so is his team-mate Giovanni Berton in the older – but still competitive – Lumina.

Although the title fight is restricted to Kostka, Baldan and Sini, the contribution of the other competitors should not be underestimated. Audi Sport Italia will field three RS5s as usual, with Kostka partnered by veteran Ermanno Dionisio and young GT driver Emanuele Zonzini, who proved himself competitive in the last two rounds.

Team BMW Dinamic will also field three cars, with the M3 E92s driven by regulars Max Mugelli and Niccolò Mercatali, with Giampiero Pindari going back to BMW machinery after a brief spell in the 2011 Superstars Series at the wheel of a 550i. With no championship ambitions getting in the way, Mugelli and Mercatali in particular are expected to be competitive and possibly play a role in the title fight.

CAAL Racing will be back on track with Leonardo Baccarelli and Diego Romanini, whereas Roma Racing Team keeps driver/manager Nico Caldarola in the sedan version of the Mercedes C63 AMG.

Two 30-minutes practice sessions will be held before qualifying on Saturday, whereas the warm up session, featured for the second time ever in the series, will last 15 minutes.

The title decider will be a single, 25′ + 1 lap race, and will start at 14.05 CET. Being in the frame of the ADAC GT Masters championship, a very large crowd is expected to witness the title fight between the Kostka, Baldan and Sini.