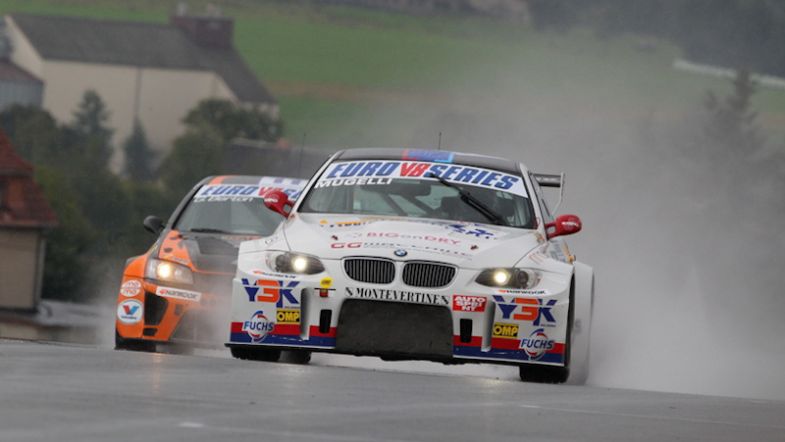 Audi Sport Italia dominated the first German event of the EUROV8 Series under pouring rain, with a 1-2-3 led by Tomas Kostka, now the leader of the championship.

All of the other cars and drivers were not even close to matching the pace of the RS 5s. BMW’s Max Mugelli was particularly upset over the situation and called for a better balance of performance, which is decided directly by the Teams’ Association this year.

“The race was really tough”, admitted the Tuscany-based driver. “After overtaking Nicola Baldan’s Mercedes I tried to put pressure on Giovanni Berton, but despite having a better pace compared to his Chevrolet Lumina I was not able to overtake him because he had a better top speed, almost 10 km/h faster than my BMW.”

Mugelli tried to overtake the 2013 runner-up in the twistier section of the track, but he was not able to make the move stick:”Going out from the ideal line there was no grip. I was side by side with him several times but the Chevrolet has 100 bhp more than my M3 and I was not able to overtake. Earlier in the race I tried to keep Ermanno Dionisio behind, but his 4WD Audi was in a class of its own. Had I tried to use the same lines as him I would have probably flown on to the grandstands!”

The Sachsenring weekend put the BMW driver out of contention, with Kostka, Baldan and Francesco Sini the only ones fighting for the title:”On a dry track I could have stayed in front of two of the three Audis, as the warm-up has shown, but the balance of performance did not work in the wet. I am now mathematically out of contention for the title, and the two DNFs I scored at Vallelunga have a huge weight on this. I will now go to Hockenheim, a track which does not suit our car, to fight for the best possible result. I think I would deserve a win, but I know I would need a lot of luck to achieve that. I will have nothing to lose, so the others will have to be careful! I expect a better balance of performance from the Teams’ Association, so I can start on equal terms compared to my competitors.”

Despite claiming pole position at his home track, Mugello, the Italian driver’s best season result is still the second place he clinched in Tuscany during the first race. The final event of the EUROV8 Series is scheduled in two weeks at Hockenheim.