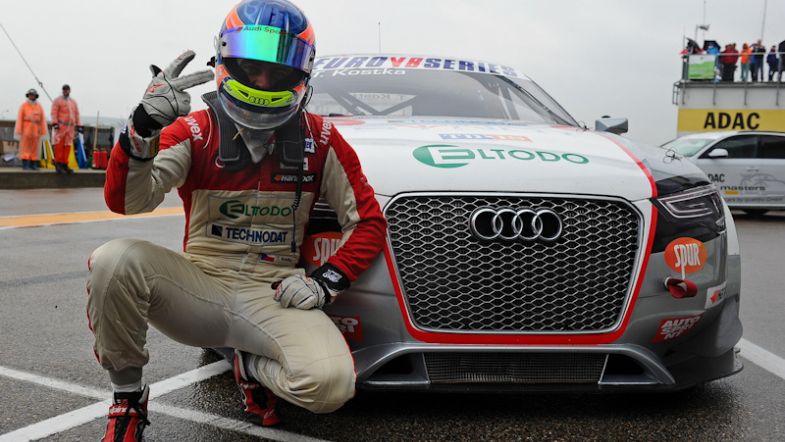 Audi Sport Italia dominated in the rain at the Sachsenring, with Czech driver Tomas Kostka leading an Audi 1-2-3 with team-mates Emanuele Zonzini and Ermanno Dionisio completing the podium.

The extended single race format was used for the first time this season, with the race distance set at 35 minutes.

Kostka led comfortably from pole ahead of team-mate Zonzini, while Dionisio put the four-wheel drive of the Audi RS 5 to good use from seventh on the grid, and worked his way all the way up to third.

Francesco Sini finished just outside the top three, and the Solaris Motorsport Chevrolet Camaro driver keeps his championship hopes alive, albeit 13 points adrift of Kostka heading into the final round of the season.

Roma Racing Team’s Nicola Baldan lost the lead of the championship, and is now two points behind Kostka after finishing seventh in his Mercedes C63 AMG, while Jonathan Giacon in the Tecnodom BMW M3 and Silvano Bolzoni in Tecnodom’s Audi RS 4 finished eighth and ninth, with Francesca Linossi completing the top ten for BMW Team Dinamic.

The final round of the 2014 EUROV8 SERIES season takes place at Hockenheim on October 5th.