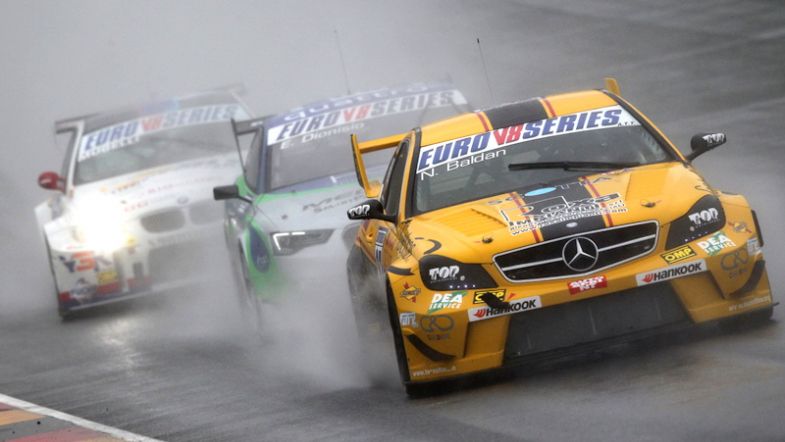 Roma Racing Team’s Nicola Baldan lost the lead of the championship in Germany, after he went no further than seventh at the Sachsenring, while title rival Tomas Kostka dominated the race and took a comfortable win in the wet conditions.

The Italian’s Mercedes C63 AMG Coupé looked strong at the beginning, as the then-championship-leader was fighting hard with the Chevrolet Lumina driven by Giovanni Berton, but as the race went on Baldan slipped down the order to finish seventh, over a minute behind the winner.

The reason for Baldan’s fall during the race was a throttle issue, which prevented the Veneto-based driver from pushing all the way until the finish line. “Unfortunately it was impossible to beat the Audis in these conditions,” admitted the Mercedes driver. “A third place was still in the cards, however,” he added, implying he could have kept the charging Ermanno Dionisio at bay.

“I saw I had the potential to overtake Berton and I could have probably caught Francesco Sini’s Chevrolet Camaro, but after a few laps I had to lift off because halfway through the race the throttle stayed opened even under braking.

“I risked flying off the track three times and therefore I elected to finish the race by lowering my pace. Seventh in these conditions is still a good result, looking at it from the title chase perspective.”

Baldan is now two points shy of Kostka and, together with Sini, remains in contention for the title. The Italian also praised the atmosphere at Sachsenring, where the ADAC GT championship attracted a massive crowd which seemed to appreciate the presence of the V8 beasts at the track:

“The crowd made for a perfect frame for the race for the whole weekend. Despite the pouring rain the grandstands were completely full and the paddock was filled with fans, it’s fantastic to go racing in those conditions!”

Baldan will enjoy a weight break, with the Mercedes C63 AMG expected to go back to its original base weight – provided the Balance of Performance committee does not decide otherwise. Kostka will carry a 30 kilos ballast, and with Hockenheim suiting the powerful 6.3 litre engine of the Mercedes, the Italian holds a good chance of making up for the two-points gap he now has from the leader.