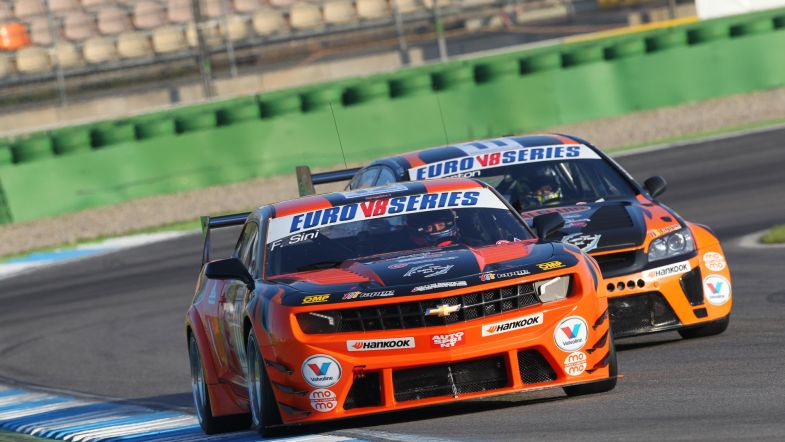 Francesco Sini won the season finale at Hockenheim as well as the championship. The Solaris Motorsport driver managed to get into the lead shortly after the start and held on to the finish. Team-mate Giovanni Berton came second in his Chevrolet Lumina ahead of Diego Romanini’s Mercedes C63 AMG. The CAAL Racing driver’s podium was vital to decide the championship as former leader Tomas Kostka finished in fourth in his Audi RS 5.

The race started with Berton taking the lead and Kostka dropping down to third behind Sini as well. The Camaro then was in the lead after two corners as Berton fought hard to keep Kostka behind before the Audi driver was able to pass. As soon as he went up to second, the Czech tried to squeeze everything he could out of his RS 5 to overtake his rival, but Sini defended well and exploited the power of his Camaro, preventing Kostka from making several attemota at getting the switch back stick.

An accident triggered by Niccolò Mercatali’s BMW M3 E92 ended up taking several cars out of the race, including Emanuele Zonzini’s Audi, BMW’s Max Mugelli and Audi’s Ermanno Dionisio. During the subsequent safety car period, title contender Nicola Baldan stopped at the hairpin, leaving the title a matter between Sini and Kostka.

At the restart Sini was able to retain the lead, as Berton overtook Kostka. The Czech started showing signs of problems as he continuously locked his rear right. The issue allowed Romanini to get closer, but the Italian was not able to pass his rival. The Mercedes made a move at the hairpin but Romanini went wide and Kostka went back up to third, but not for long as the Czech had an off at the Motodrom hairpin, losing a place and even suffering from a puncture with one lap to go.

Despite Kostka managing to come fourth, it was Francesco Sini who took the title, as well as the race win. The Italian, a veteran in the series, finished on 169 points, just one point ahead of Kostka.

Only five cars made it to the finish, with Sini ahead of Berton, Romanini, Kostka and Mercedes driver Leonardo Baccarelli.

The series is now scheduled to undergo a major transformation. A new promoter should come into play, with new sporting rules, teams and cars entering a series which will be renamed as SuperTouring Series. More details will be revealed in the near future.